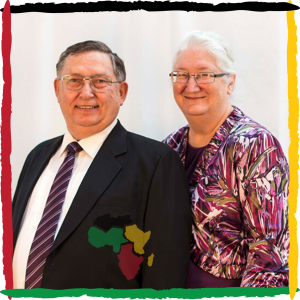 In February 1994, the Randall Richardsons assumed the oversight of the island nations of Mauritius, Seychelles, and Réunion. Originally appointed to Madagascar in 1980 after a two-year AIM assignment, they served for 16 years in Madagascar, during which time the church grew from 2,000 members to more than 25,000. The Randall Richardsons pioneered the work in Seychelles with the help of a Malagasy brother, while giving leadership to the church in Mauritius and working to establish the church in La Réunion. God has blessed with over 4,000 constituents, 18 churches and preaching points, and 14 licensed ministers in the three nations. In 2000 the Richardsons were unable to secure a resident visa for Mauritius. Therefore, following a short furlough, they studied French in Bordeaux, France, for nine months before establishing residency in La Réunion, from where they lead the work in the three nations.

Praising the Lord for another great weekend across the continent! People baptized in Jesus name and filled with the Holy Spirit. God is working! ...

Thankful for this report from a sensitive area on the continent -- seven baptized of water and Spirit! Praise the Lord! ...

Praising the Lord for twenty-eight (28) baptized in Jesus name in Benin, West Africa! ...