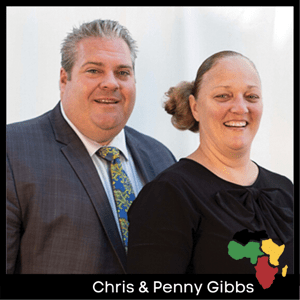 Biography:
Chris at the age of 19 received his calling to ministry and missions at the same time, knowing one day he would be involved in ministry in the continent of Africa. Chris attended The Ohio State University studying Pre-Med and also Carl F. Smith Bible Institute. Penny attended Phillips College and earned a Associates Degree in Hospital Administration, and received her calling to missions while studying at Jackson College of Ministries. In 1998 Chris met Penny in Cameroon, West Africa while both were serving as AIMers. They taught in the Bible school, assisted with crusades and traveled as an evangelist in the country. Chris and Penny married in 2000 and assisted Gary Keller in Lancaster, Ohio from 2000-2009 serving as Youth Pastor, College age leader, Outreach Director, ACTS instructor, and Assistant Pastor, always with the knowledge they would go back to their first love, Africa one day. They spent two years in Malawi, Africa under the AIM program, yet served as UPCI representatives for the nation. Chris and Penny also have two wonderful children, Caleb and Jacie. In October 2012 they received their missionary appointment to Malawi.