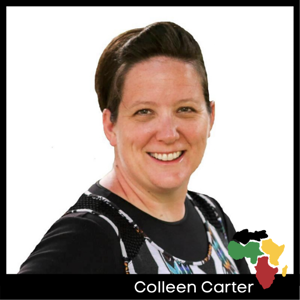 Biography:
Colleen Carter was an Associate in Missions for eight years to the country of Ghana, West Africa with the Jim Poitras and Nick Sisco families. As an AIMer, Colleen helped with MK schooling, taught at ACTS Ghana, operated the Pass the Word printing office, was involved in Reaching Africa’s Children, and assisted the missionaries in many other ways.

Colleen received her Intermediate missionary appointment to Ghana in September 2007 and arrived on the field in February 2010. She continued with the aforementioned tasks except the MK schooling.

In June 2014 she received her Bachelor of Arts in Religious Education through distance education with Global University, Springfield, MO. At the beginning of her second term (June 2015) on the field Colleen upgraded to Career missionary appointment. She continued with the above tasks and also ministered at the female prison in Tamale.

In November 2017, Colleen moved back to the capital city of Accra. Regional Teaching Ministry was added to the Ghana appointment and she began to travel to various nations in Africa for training seminars and conferences.

In September 2019, the Global Missions board approved a field change for Colleen. She is now appointed to Gabon and Regional Teaching Ministry. After deputation she will fulfill her job description as Administrator of the Welch Training Center in Libreville, Gabon while continuing to travel throughout the Africa region for training and conferences as the schedule allows. She will also continue to serve in the West Africa sub-region and Africa region as the Regional Missions secretary/treasurer and Africa Aflame Coordinator.

Ministries on field:
Administrator of the Welch Training Center