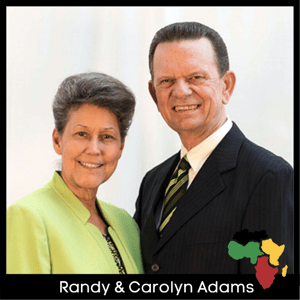 Biography:
Randy and Carolyn Adams were appointed global missionaries in 1995 to the West African nations of Togo and Benin. They were able to open up new works in the nations of Gabon and Niger in 2000, and in 2002 the Central African Republic was opened. Also in 2002, the Adamses were given the additional responsibility of Area Coordinator to French West Africa, and in 2012 the English nations were added, extending their responsibilities to include twenty-three nations.

Training has been an important part of their involvement from the beginning. They worked closely with the national leadership, teaching and training the men and women God has called into His harvest. As a result, the UPCI of Togo was nationalized in 2010, and Benin attained nationalization in 2014.

In 2014 the Adamses were appointed Regional Director to the Africa Region effective January 1, 2016. As Regional Director they now serve as liaison between the many nations and churches in Africa, the missionaries, and Global Missions.