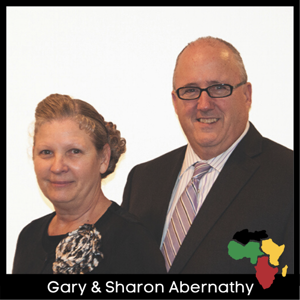 Biography:
Gary Abernathy, an alumnus of Apostolic Bible Institute and the son of veteran missionaries, Charles and Janet Abernathy (both deceased) to South Africa.  Gary felt the call to foreign missions while assisting Pastor David M. Hudson (deceased) in Syracuse, Indiana.  He and his wife, Sharon, received their appointment as UPCI missionaries to South Africa in May 1981.  During their first term the Abernathys were heavily involved in the Bible School and other aspects of the training ministry.

In 1986, the Abernathys were appointed to Malawi, where they arrived on location in 1987 after deputation.  They continued to emphasize the ministerial training in Malawi through their second and third terms.  Brother Abernathy believes that the only way to reach Africa’s millions is through trained national ministers.

In 1998, Bro. Abernathy assumed the leadership as Superintendent of the church in Zambia. He works closely with the national leadership of the UPC Zambian church.  Both teach at Word Aflame Bible College, and Sis. Abernathy oversees the very progressive Women’s Division of the United Pentecostal Church of Zambia.  The UPC of Zambia is now a nationalized work (2014) under the capable leadership of Rev. Morgan Mwanza, General Superintendent, as well as the General Board of Zambia.

Training remains a big part of any successful work in each country.  The Abernathys continue to train in Bible School, leadership seminars, regional conferences, youth conferences, youth seminars, ladies conferences, ladies’ regional seminars, as well as General Conferences.  They have worked with the Zambian church for twenty-two (22) years and consider them ‘family’.

In 2015, Brother Abernathy was appointed as Area Coordinator for the South-Central Region of Africa under the leadership of Regional Director, Rev. G. Randy Adams.  He has worked closely with the leadership of the eleven (11) countries that are in this region and is excited about what has happened within each country and excited to see the future of each country. It is a privilege and honor to work with so many wonderful missionaries and leaders within the sub-region, as well as the continent of Africa.

When Gary and Sharon first arrived in Cape Town, South Africa in 1982, their two sons, Jason Wayne was seven years old and Brandon Lee was two years old.  Jason lives in Goodyear, AZ with his wife Sydney and Brandon lives in Marion, IL with his wife, Adrian and son, Gavin Lee and is the pastor of Johnston City United Pentecostal Church.

Time has moved ahead for all of us.  However, Brother Abernathy has often said, “If we had another life to give, we would give it to Africa again!”