Capital City:
Khartoum, Sudan’s capital, is located roughly at the center of the country, at the intersection of the Blue and White Nile rivers.

Geography:
Located in East Africa, Sudan includes both the White Nile and the Blue Nile. The central and northern areas are dry but the south is made up of grasslands and has more rain than other parts of the country. The county is rich in mineral resources and has some oil reserves.

Economy:
Sudan is one of the poorest nations and least developed countries in the world, with one-third of the population dependent on agriculture. The county is also rich in mineral resources and has some oil reserves.

Important Facts:
Sudan has a very long recorded history that goes back to around 800 BC. An ancient state that grew to prominence with the downfall of Egypt, they eventually invaded and ruled over the country of pharaohs. In the early 1900’s, Britain ruled over Sudan until 1952 when Egypt revolted. This revolt would begin the push for independence in Sudan. In 1956, Sudan would become a free and independent nation. 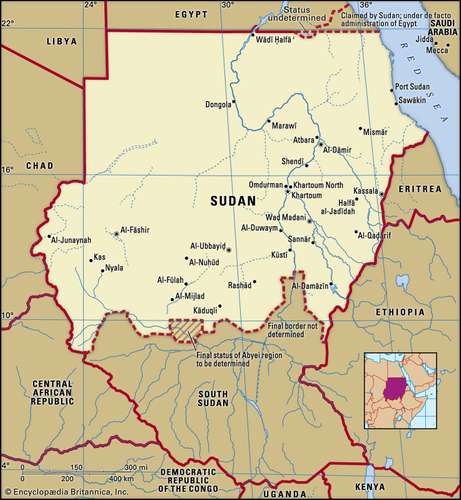 Click on the map above to see additional information concerning this country from britannica.com.